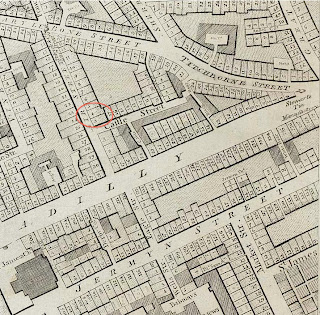 Towards the beginning of the LCS's existence, on 20 November 1792 Christopher Kennedy, of Cross Court Long Acre, a carpenter and Bow Street constable, reported that Div 16 met on Wednesday at the Crown, Air Street, though he himself was not in attendance. (TS 11/959/3505; Thale 29).

According to the Survey of London, vol 31:

'Aire Street' (which in its southern part follows the boundary of Swallow Close and Round Rundles) first appears in the ratebooks in 1658, its name being presumably derived from Thomas Ayres, brewer, who held leases in the neighbourhood. The northern part of the street formed the western boundary of the Sherard estate, and was sometimes referred to as Francis Street, probably after Francis Sherard. The St. Albans rent-roll of 1676 mentions twenty-three houses in the street.


According to John Feltham's The Picture of London for 1803 there was a dissenting meeting house in the street at the beginning of the nineteenth century.

This area was heavily rebuilt as part of Johh Nash's Regent Street and Piccadilly developments from 1811 to 1825. The Crown, however, seems to have survived these development and continued to exist until at least 1834, when the landlord Joseph Henry Winter insured it with the Sun Fire Office (see Guildhall Library MS 11936/544/1184257).

Air Street was severely damaged in the Blitz, as this photograph from Life shows, although whether the Crown had survived that long is highly doubtful.

In the words of the Survey of London "Air Street is now arched over at first-floor level by the buildings on the north and south sides of the Regent Street Quadrant, which cuts across the street near its southern end."


View London Corresponding Society Meeting Places in a larger map
Posted by Ian Newman at 10:30 AM No comments: