At a meeting of the General Committee on the 6 August 1795 it was reported that "Div 13 branches to the French Horn Lambeth Walk to be No 44 Neale, Peirce, Williams" (Add MSS 27813, fos. 94-101; Thale 280). By September, however, the division's meeting place had to be moved from the French Horn to the Queens Arms Kennington Lane,  (PC 1/23/A38; Thale 305). Spy Powell later reported from a meeting of the General Committee held on 29 October 1795 that the Landlord had lost his license "on account of a Division meeting there" and that "a deputation [was] appointed to enquire into the character of the House" (PC 1/23/A38; Thale 318).

The report is intriguing as it suggests that the General committee were willing to provide funds to help support landlords who had lost their licenses due to LCS activities, though they would not do so indiscriminately. The need for a deputation to enquire into the character of the House suggests it was not well known to the members of the General Committee, and required further investigation to find out whether it was solely the fault of the LCS that the landlord has lost his license, or whether they had been a pretext for the magistrate to take away the license of a public houses that was already of ill-repute. It suggests some of the complications the General Committee faced in the relatively prosperous years between the 1794 Treason Trials, and the Two Acts.

Peter Walker's The Pubs of North London (P. Walker, 1989), claims that the pub was founded in circa. 1750 and rebuilt in 1890. In 1989 he describes it as a “nice family pub”, remarking that “the new tenant has been making some good internal improvements, removing some of the less attractive partitions and exposing the earlier surfaces.” The later building still stands, but no longer operates as a public house.

For much of the eighteenth century Lambeth Walk was a small country lane known as Three Coney Walk. The area became significant thanks to Lambeth Wells which opened towards the end of the 17th century, principally to provide water to St Thomas's Hospital. The fields in the area became a popular resort and people would come for the water, and concerts and dancing were held for their entertainment, and the Wells became a well-known pleasure garden for about fifty years. By the 1750s however it was condemned as a nuisance and the Great Hall in which the entertainments were held was denied a dancing license, when it became a Methodist meeting room, (see Warwick Wroth, Pleasure Gardens of the Eighteenth Century, 1896 pp. 279-80 and The Vauxhall Society website).

The French Horn seems to have been built at about the time that Lambeth Wells was closing, and indeed may well have taken its name from the musical entertainments that were popular at the pleasure garden. The earliest record of it I can find dates from February 1774, when the lease was up for auction. The advertisement for the auction described it as "that old-accustomed Public House," suggesting that it had existed for some time. "The Premises" the advertisement promised, "are greatly improved, and upwards of 200l. have been laid out on them within these two years." Again the suggestion is that it had been standing some time, but that it had gained a reputation that only a substantial facelift could improve.

The public house is mentioned again in the Times on October 13 1788, where an article mocking the pointless fad of collecting, describes "a person at the French Horn, in Three Coney Walk, [who] has spent twenty years collecting a variety of stuffed birds and cockle shells, which he now call a Museum."


Three Coney Walk must have changed its name to Lambeth Walk shortly after this article was published, as it is known as by the latter name by 1795 in the LCS papers. Subsequent records suggest that it was originally at number 113 Lambeth Walk, on the corner of Walnut Tree Walk.

View London Corresponding Society Meeting Places in a larger map
Records from the Sun Fire Office show that the French Horn in Lambeth Walk was insured to a John Beeby from 1820 to 1829 (London Metropolitan Archives MS 11936/478/964197, 14 February 1820;  MS 11936/521/1088293, 12 March 1829). The Will of Elizabeth Beeby (National Archives, PROB 11/1843/367) lists the French Horn as her address in March 1835. The pub history website reports records a series of landlords between 1869 and 1884, by which point the street numbering had changed, the address now listed as 49 Lambeth Walk. By now Lambeth Walk was the home to a thriving street market, described by Henry Mayhew as having 164 costermongers' stalls. The market continued to flourish until the end of the Second World War.

In June 1998 the it was proposed that Lambeth Walk and China Walk be designated a Conservation area. "In the 1950's" the proposal claimed, "massive clearance schemes robbed the area of much of its character, sweeping away late Georgian and Victorian properties and replacing them with medium rise blocks of flats and open grassed areas. However, an interesting group of about two dozen properties survived agains the odds - many are in a various states of disrepair [sic], but together form an important reminder of the old historic and architectural character of Lambeth Walk."

No. 49 Lambeth Walk was one of the historic buildings that the report singled out as architecturally significant, describing it as "an attractive four storey building, formerly the French Horn Public House... It has stock brick elevations with re-brick banding and Edwardian style painted timber sash windows - on the first floor surmounted by subtle red-brick pediment detailing."The report comments that the public house had a similar architectural treatment to  numbers 77-87, which it estimates was built in about the 1910s. 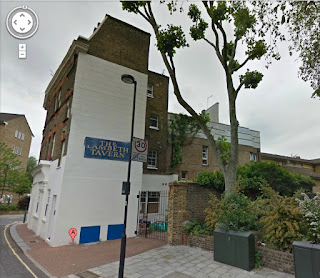 At the time of writing the building has been converted into offices by the "Lambeth Tavern Management Company,"so the later building remains, though, despite the misleading sign it does not function as a public house.
Posted by Ian Newman at 4:59 PM 1 comment: