There were a number of other public houses called the Crooked Billet, aside from the one that the LCS met in. For example there was one on Tower Hill, which was, according to H.E. Popham, originally a Royal Palace that had been an inn since the days of Henry VIII. An underground passage apparently afforded communication with the Tower of London. Most of the rooms, Popham observed in 1927 when the Crooked Billet still stood, were wainscotted in oak, and many were provided with secret hiding places. Leopold Wagner, writing in 1924 described the inn's demise:
Until recently its internal embellishments comprised richly carved chimney-pieces, oak panellings, fine ceilings and freizes and representations appertaining to ancient music. Now everything detachable has of late been taken away, so that irrespective of its tavern equipment, naught but the shell remains to tell the tale of departed glory. 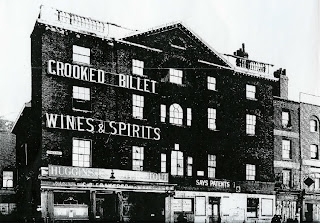 It was, however, still standing in 1936, when the photographer Bill Brandt took a series of images of the interior. 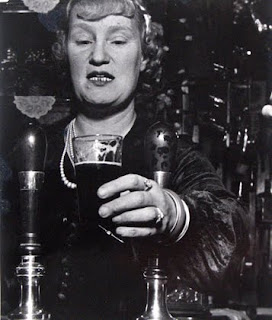 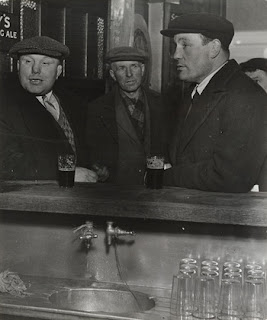 Another Crooked Billet was found on Crooked Lane in Eastcheap, which dated to the reign of James II.

The one which interests me most, however, was at the back of St Clement Danes near the Crown and Anchor. Writing in 1828 on the subject of songs sung about the street, Francis Place recalled this pub in connection with a pair of notorious drinking songs. The first was 'Sandman Joe,' (also known as 'The Sandman's Wedding') which was published in a cleaned up version by the Anacreontic Society which met at the Crown and Anchor. Place's version, however, includes a much more graphic verse that never made it into the printed text:

He star'd awhile, then turn'd his quid

Why, blast you, Sall, I loves you!

And for to prove what I have said,

This night I'll soundly fuck you.

Why then says Sall, my hearts at rest

If what you say you'll stand to;

His brawny hands, her bubbie prest

He concludes his transcription of the song with the following observation:

It was usually for a long time on saturday night sung in an open space at the back of St Clement in the Strand at the front of an alehouse door called the Crooked Billet by two women who used to sham dying away as they concluded the song amidst roars of laughter. (Add MSS 27825 ff. 154)

Two women used to sing a song opposite a public house the sign of the Crooked Billet at the Back of St Clements Church in the Strand it was an open space between Holywell Street and Wych Street. The song was a description of a married man who had a lecherous wife, it described his being a pale fellow reduced by her to a skeleton. I can only remember the last two lines.

“And for which I’m sure she’d go to hell
For she makes me fuck her in church time.”

I remember these words in consequence of the shout which was always got up as the song closed with them. (Add MSS 27825 ff. 148)

This Crooked Billet was located at 37 Wych Street, but changed its name in around 1856 to The Rising Sun. The map below is John Rocque's map of 1746 (this area is awkwardly split between two sheets of Horwood's map of 1792-9). It shows Wych Street and Holywell street coming together to form "Back Side" just outside St Clement's opposite Arundel Street, where the Crown and Anchor was located. 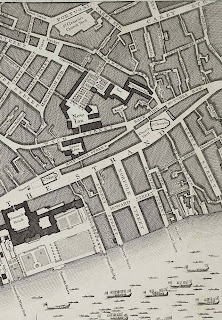 A series of images shows the conjunction of Holywell Street and Wych Street head on, and reveals the Rising Sun alongside a variety of different businesses: 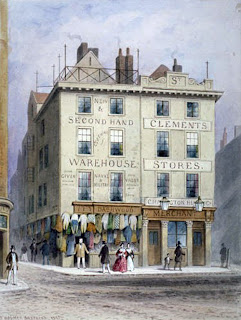 This image, by Thomas Hosmer Shepherd dates from 1855, and is held at the British Museum, as part of the Crace Collection. Here the Crooked Billet is shown as the "St Clements Stores," though it was registered as The Crooked Billet in the Post Office Directory as late as 1856. The sign above the door reveals it to be owned by "Charrington Head Co." This was the name the Charrinton Brewery traded under between 1833 and 1880. Thomas Hosmer Shepherd was employed by Frederick Crace who employed him to paint pictures of old buildings before they were demolished. In this case, however, it seems that the building was not demolished, as it is shown going strong in a second image, by John Crowther (1837-1902): 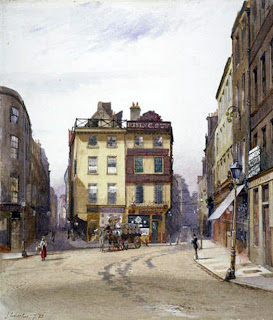 Crowther's image dates from 1881, and is in the Chadwyck-Healey Collection at the London Metropolitan Archives. It shows The Rising Sun on the left with a beer cart in front of the tavern. 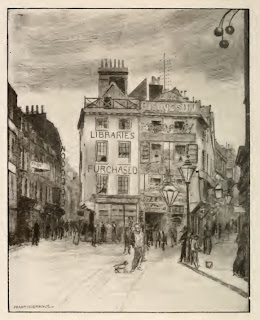 This final image is taken from Frank L Emanuel's illustrations to Wilfred Witton's A Londoner's London (1912). The Rising Sun is no longer next to Dashwood's second hand clothes store as it was in Shepherds picture of 1855. Now it abuts a second hand book shop, which proudly announces that it purchases libraries. The Wych Street-Holywell Street area was demolished in around 1899 to make way for the building of Aldwych, and the Aldwych Theatre, so this illustration must have been drawn from an older painting, which I have been unable to locate.
In fact, this area was well know for its second hand clothes and cheap books. The London Metropolitan Archives holds a surprisingly large number of permit requests for printing presses in the 1820s and 1830s. Edward Walford observes of Wych Street in Old and new London: a narrative of its history, its people, and its places Vol 3 (1873):
Like Holywell Street, of late years this thoroughfare has gained a notoriety for the sale of books and prints of an immoral class, and at present the sale of them is only partially suppressed. In bygone days, however, it was tenanted by a very different class of persons; although in 1734, according to a statement quoted by Mr. Diprose, this street was "much taken up by upholsterers for the sale of bedding and second-hand household goods."
On September 5, 1874 the Builder published a letter from 'A Working Man.' In the letter the correspondent describes a legend belonging to these streets at the North of the Strand, which colorfully illustrates the condition of the streets around the Crooked Billet, before they were knocked down to build Aldwych:
the whole nest of streets and passages behind the south side of Lincoln's Inn Fields requires re-arrangement and improvement. There is a legend hereabout that years ago a young man from the country, bearing a black bag, started one winter night from PortugalStreet to get into the Strand, and that he has been wandering round and about ever since, constantly returning with a disconsolate aspect to his original starting-point. On foggy nights his form may be descried in Clare Market. Anyhow, no one has yet heard that he ever reached the Strand.
What is perhaps most remarkable about these accounts of the street around the Strand is their proximity to the more respectable buildings that lined the streets of the Strand itself -- including the famous Crown and Anchor tavern. They create a sense of London in the late eighteenth and early nineteenth century in which the legal world centered around the great inns of court must have constantly jostled with the inhabitants of the nest of streets in which men and women spilled out of the pubs singing lewd ballads and simulating orgasms.
Note: I owe a large debt of gratitude to the website arthurlloyd.co.uk whose pages relating to Wych Street have helped immeasurably with the history of the Crooked Billet.
Posted by Pub Hunter at 8:04 AM