In the minutes of an LCS General Committee, from 10 September 1795 it is reported that at an apparently fractious meeting, Division 57:

requested a deputation to go to Mitcham to morrow evening to meet at the Elliots head the other side of Newington at 1/4 before 5 O'Clock.
To be No 60 deputed Haselden, Hiram Powell B Binns
Morgan, Haselden resigned -
Movd & Sec'd that Citn Patton be heard - Neg, -
(Thale, 302; Add MSS 27813, fos 126-9)

Mitcham, at about 9 miles to the South of Westminster Bridge, was a significant journey from London, but evidently close enough that deputations could be expected to travel there from the Metropolis. According to Daniel Lysons "The Environs of London" published in 1792, there were around 450 houses in Mitchum, with a substantial amount of land (250 acres) used for "physic gardeners, who cultivate lavender, wormwood, camomile, aniseed, rhubarb, liquorice, and many other medicinal plants, in great abundance; but principally peppermint, of which there are above 100 acres. The demand for this herb is not consined to the apothecaries shops, it being much used in making a cordial well-known to the dram-drinkers."

I have been unable to find any records of an Elliots Head in Mitchum, although another public house of that name was in the new development of Prospect Place in St George's Fields near Lambeth. 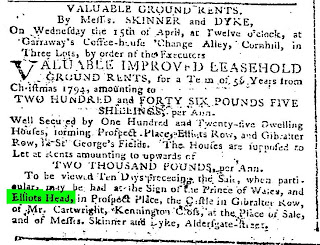 Powell, listed as one of the deputed men, was a spy. His report listed the meeting place as the Buck's Head, not the Elliot's Head, so this could simply be an error in the LCS minutes.
Posted by Ian Newman at 7:01 PM