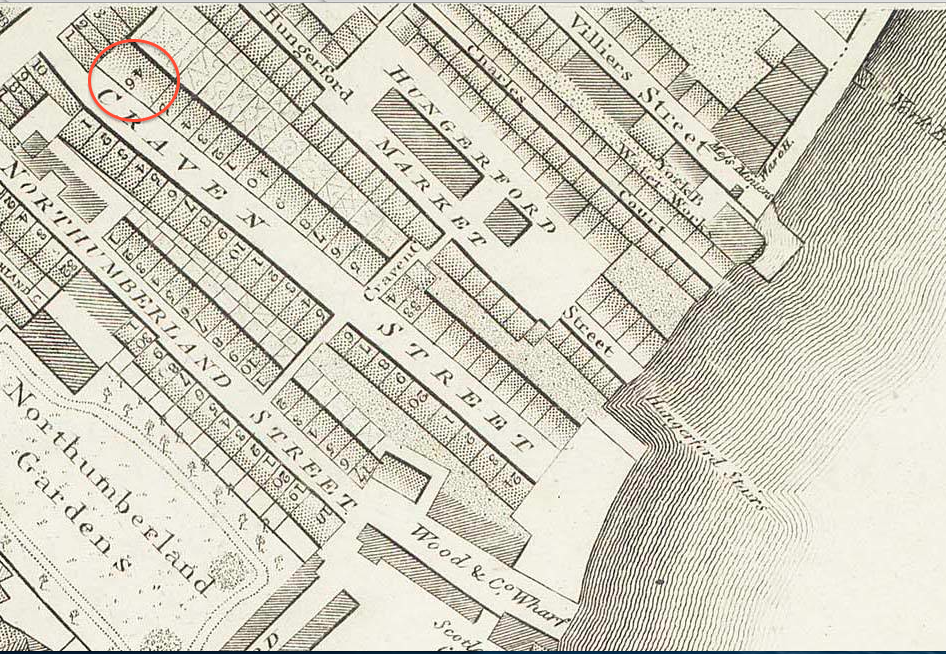 Not to be confused with the Globe Tavern on Fleet Street, the Globe on the corner of the Strand and Craven Street housed the general meeting of all divisions of the LCS on Monday 20 January 1794. The meeting was organized by a subcommittee of LCS members including John Thewall, John Philip Franklow, and Thomas Stiff, who all acted as Stewards. In the chair was John Martin. The meeting began at 1pm and was followed by dinner at 5pm. Tickets cost 5s and 6d, wine included (6d less than the dinner at the Crown and Anchor, and 6d less than the abandoned dinner at the Globe Fleet Street the previous September). According to later accounts the meeting was attended by a great many members, with most of them leaving before dinner, at which 500 were present.


Thomas Hardy later provided the following account of the meeting:

A remarkable incident happened in this days business. The multitude who assembled at the tavern in the first floor being so heavy that one of the principle beams of the floor broke in the middle and gave way about a foot and threatened destruction to the whole building and also to the large company that were in the house - great confusion ensued everyone endeavoring to get out of the house first - to save his life - however it soon subsided - carpenters were set to work immediately and put up temporary supports in the coffee room underneath. When that was done the society resumed business - they were not to be deterred from proceeding with what they had projected by a threatened accident of that sort. When they had finished by receiving the unanimous assent of the society present to the address he adjourned, except about five hundred who dined together and spent the remainder of the day in the greatest harmony and conviviality. (British Library Add MSS 27814 fo. 39)

The account is significant for a number of reasons (not least of which Hardy's usual determination to depict the meeting as harmonious and respectable despite the collapse of the floor, which could easily be represented as an inevitable outcome of a meeting of the swinish multitude). For my purposes it's interesting because it provides useful details about the layout of the tavern, which in fact conforms to the floor plan of many of the more respectable taverns of the period. On the ground floor is the coffee room -- the respectable more public face of the tavern. Upstairs on the first floor is the large room where meetings and large dinners could be held, which could be privately hired.

Hardy also provides a sense of the order of the events of the meeting. During the business part of the meeting in the afternoon the address was read and resolutions agreed to. After the conclusion of the business, dinner was served accompanied by "harmony and conviviality," involving presumably the singing of songs and the drinking of toasts.

The order of events is significant because the meeting at the Globe Tavern came up again and again during the Treason Trials of both Hardy and Thelwall later that year. One of the issues which was hashed out by the lawyers during the trial was whether the allegedly treasonous songs that were sung at the meeting were part of official LCS business, or whether they were sung by private individuals at a private dinner. Were they sung as part of a large conspiracy to subvert the authority of the government, or were they utterances of private individuals exercising their constitutionally protected right to exchange opinion? The meeting at the Globe Tavern then is of particular interest to historians of the LCS because we have an almost complete record of the events of the meeting: the arrangements made for the meeting itself, the advertisement placed in the newspapers, a sense of the building in which the meeting took place, printed copies of the address that was given, the resolutions that were agreed to, the toasts that were drunk, and the songs that were sung (3 of which were by Thelwall), as well as several eye witness accounts given as evidence during the Treason Trials.

The Globe Tavern meeting was of particular interest during the Treason Trials in part because the address, resolutions, toasts and songs were noticeably less circumspect than at other LCS meetings, which had much to do with the timing of the meeting. The meeting followed on the heels of the first of the Edinburgh trials for sedition which took place after the British Convention. The LCS had sent  two members to Edinburgh, Joseph Gerrald and Maurice Margarot. Six days before the Globe meeting Margarot had been been found guilty of sedition and sentenced to 14 years transportation. Joseph Gerrald would eventually be given the same punishment, although his trial was postponed until March, so he was present at the Globe tavern meeting, where he gave a moving tribute to Margarot. Also present, acting as a Steward, was Charles Sinclair who had been at Edinburgh convention serving as the delegate for the Society for Constitutional Information, though he wasn't brought to trial as he turned King's evidence.

Feelings at the meeting were understandably running high, leading to a number of particularly (uncharacteristically) incautious comments. The rousing final statement of the address, for example, pointed out that men in a state of civilized society were bound to seek redress of their grievances from the laws as long "as any redress could be obtained by the laws," pointing out that "we must have redress from our own laws and not from the laws of our plunderers, enemies and oppressors." This was followed by a resolution that the LCS general committee would meet every day during the next session of parliament and "upon the first introduction of any bill or motion inimical to the liberties of the people" they would issue a summons to the delegates of each division and to the different societies with which they corresponded to call for a General Convention of the People -- precisely the kind of convention for which Margarot had received fourteen years transportation.

There are references to a Globe Tavern in the Strand as early as 1736, though the tavern on the corner of the Strand and Craven Street begins to appear in newspaper reports with some consistency from 1770 onwards. It was particularly prominent during the 1790 Westminster Election, when the supporters of Lord Hood's election campaign met there regularly, campaigning not only for Hood's re-election but also for a peaceful election campaign -- with recent turbulent and sometimes violent elections in mind -- which involved Public Houses being closed for entertainment, and no music being used which might "disturb the tranquility of the city."

For the same election the Globe was also used for a dinner by supporters of Horne Tooke, the SCI leader, where the tickets cost 7s 6d -- making the LCS's 5s 6d seem relatively inexpensive, though still perhaps surprisingly steep for a society comprised of tradesmen and shopkeepers.

In February 1789 the tavern's lease was put on sale at a cost of one hundred pounds a year by the incumbent occupant Mr Luke Reilly, who listed his occupation as "Vintner," the usual designation for keepers of taverns. The advertisement claimed that the tavern had been in operation for "upwards of 50 years," but had been recently renovated for sale. The advertisement also mentions arched vaults, cellaring and stabling in the tavern, and that the tavern, "frequented by the most respectable Companies, Parochial Meeting and established Societies," provided "every convenience for business."

Apparently the sale of the lease was not a success, and by May 1790 Reilly, still the vintner, was advertising that the tavern had been re- opened having undergone further alterations including a considerable expansion of the building, with particular emphasis being placed on the "very capacious concert and ball room" -- where presumably the LCS meeting took place -- as well as several Dining rooms in addition to the "spacious and pleasant Coffee Room" downstairs.

By the end of the eighteenth century the Globe had changed its name to the Craven Hotel, which continued to operate on this site into the early twentieth century (see the post office listings on pubshistory.com). At the time of writing the site, on the stretch of the Strand between Trafalgar Square and Charing Cross Station, was occupied by a branch of the clothing retailer Next.
Posted by Ian Newman at 8:58 PM