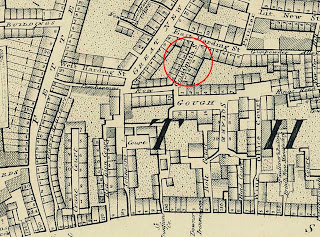 In a spy report from 23 June, 1794, spy Metcalfe gave a rare glimpse into what an LCS meeting might have involved:

Went in Company with Burks and Davis to the Falcon in Gough Square, where Division 9 which had been nearly dispersed had been assembled, there was 30 present and it appeared to be an Evening of pleasure rather than business, many very Treasonable Songs were sung and they did not break up until past 12 oClock (Thale 1897; TS 11/956/3501).

This was the second of two meetings that Metcalfe had attended that evening (the other was a meeting of the Div. 6 at the Parrot in Green Harbour Court by the Old Bailey). And while Metcalfe's reports tended to a zealous conservatism, determined to show the malefactors of the LCS in the worst possible light, his report on the earlier meeting had conceded that there was nothing of interest to report. The evident glee with which Metcalfe reported on the "evening of pleasure" at the Falcon and the "Treasonable songs" they sung may well have been heavily colored by his loyalist sentiments, but this is not to say they were untrue.

Despite Goddard's claim in Hardy's Treason Trial of 1794 that he had never heard songs sung at LCS meetings, there is plenty of evidence that songs were indeed sung. Metcalfe enclosed a copy of one song that he says he heard at the meeting called "Parody on the Song of Poor Jack," printed by Thomas Spence. According to Thale this song "contemptuously dismissed Richmond and Burke, it concludes that the time is near when Britons "shall assert their demand," and that tyrants shall never rule this island" (Thale, 187 n. 91).

The Falcon was (somewhat confusingly) located very near the Falcon on Fetter Lane, in one of the mazey allies to the north of Fleet Street near where Samuel Johnson lived (Johnson lived at 17 Gough Square). It had been there at least since 1768, when it was listed as one of the addresses at which E. Graves of Shadwell could be contacted by those gentlemen who wanted to decorate their ceilings with "ornaments of paper-machee." 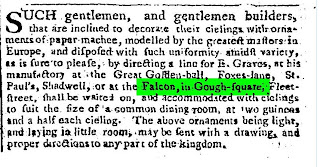 In August 1835 it was insured to a John Crump with the Sun Fire Office, which lists the address as Goldsmith Street, a small alley with around 10 residences just off Gough Square (Guildhall Library, MS 11936/546/1202777).

In 1846 it was registered as the address of the "Falcon Coal Club," (see Accounts and Papers of the House of Commons, 1877)


In a letter to Scottish Notes and Queries in October 1902, J.F. George observed that when he used to lunch occasionally at the Falcon it was a house that was "much resorted to by overseers and machine operators from the neighboring printing offices."

It remained on the site until around 1944, when it was run by Mr and Mrs Cliff Taylor, who removed to the Golden Lion in Kings Street, most likely because of damaged sustained to Gough Square in the second world war. 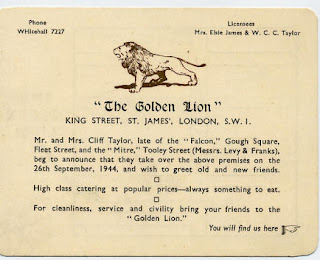 (Thanks to Mike Weaver, via deadpubs.co.uk).

I have been unable to locate precisely where the Falcon was on Gough Square. Goldsmith Street on which it was located, no longer exists, buried somewhere underneath Pemberton House. This image of Gough Square from 1902, however, gives an idea of the Square itself before the post-war redevelopment. 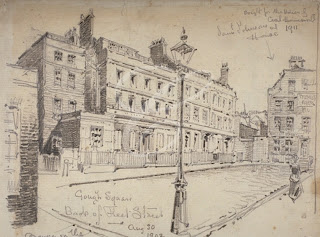