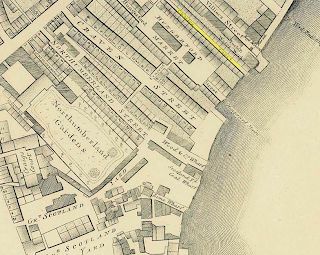 A spy report from Spy Powell from a meeting of the LCS General Committee on 17 September 1795 mentions the removal of "Div 42 from the 1 Ton Strand, to the Feather Chas Court Strand."

In the 1770s the Feathers tavern was a regular meeting place of clergymen, who gathered there to campaign for relief from parliament. In the 1780s it was also the meeting place of the Society for the Support of Decayed Musicians, whose chairman was Charles Burney. (See Morning Post and Daily Advertiser July 27, 1784). 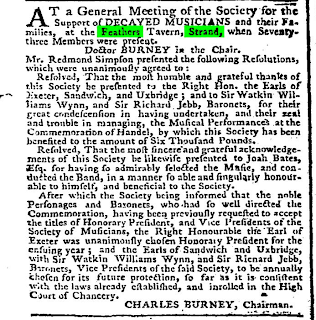 In December 1790 a T. Williams announced in the World newspaper that he had recently fitted up the tavern "in a genteel manner, with good beds, and well aired apartments for the reception of Families." Announcing also hat the he had "Fine Old Port, of the vintage eighty-seven and eight, wholesale and retail." 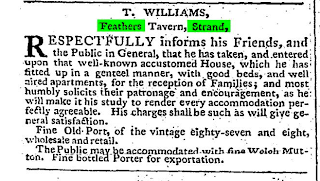 World Tuesday, December 14, 1790
For all Williams' intentions to make the tavern into a genteel location for Families, it seems to have remained an obscure house which barely registered on the consciousness of the metropolis. Horwood did not mark it on his map, something that he did with large, respectable taverns. Indeed he shows only a uniform row of featureless, unnumbered houses down each side of Charles Court, which suggests that he felt there was nothing there worth observing more particularly.

In 1720 Strype described Charles Court as "a very handsome new-built Court, with Houses fit for good Inhabitants, having a Stone Pavement down to the Thames, where there is a Pair of Stairs for the conveniency of the Water. Out of this Court there is a Passage intoVilliers-street, and another intoHungerford Market. But by the beginning of the nineteenth century the old market and its surroundings had become an eyesore, "a deplorably dirty-looking piece of ground, flanked by squalid houses, and little better than a monster dust-heap, and a cemetery for the dead dogs and cats of the neighborhood." In 1862 the whole of the area in clouding Charles Court and Hungerford Market, was bought by the Charing Cross Railway Company for the formation of Charing Cross Station. (See Survey of London, Vol 18)