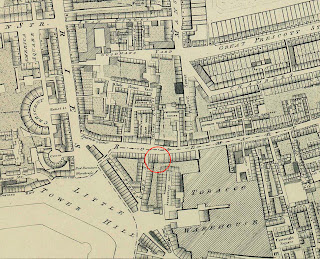 In his report on a meeting of the General Committee that took place on 17 September 1795, Spy Powell reported that Division 10 was to move from "14 Stairs Rosemary Lane to the Queens Arms Crutched Friars"

The Fourteen Stairs was insured to John Withers, victualler, on 26 June 1794, (Records of the Sun Fire Office, London Metropolitan Archive, MS 11936/397/628684). It was still operating in 1800 when it was insured to "Earl." The records from the Sun Fire office lists the address as "10, 11, 12 Rosemary Lane" suggesting that is occupied the site of three separate buildings to the west of Rosemary Lane, next to the Tobacco Warehouse.

Rosemary Lane, now Royal Mint Street, ran from Cable Street to the Tower of London. The poet Edmund Spenser was born here in 1552, and endowed a group of cottages on the north side of Rosemary Lane as almshouses. Though a relatively short street, Rosemary Lane was well known as the site of Rag Fair, which is mentioned frequently in literary works of the eighteenth century. Daniel Defoe's Colonel Jack (1722), for example, went with his companions to Rag Fair and "bought two pairs of shoes and stockings for 5d., and went on to a boiling Cook's in Rosemary Lane where they found cheap fare."  Rag Fair also appears in Pope's Dunciad as one of the areas in which journalists liked to gather. Pope provided the note: "Rag-fair is a place near the Tower of London, where old cloaths and frippery are sold."

Rag Fair had a particular reputation for selling goods that had been stolen, and the cheapness of the goods was frequently remarked upon. According to Thomas Pennant in his book Of London (1790), "The articles of commerce by no means belie the name. There is no expressing the poverty of the goods, nor yet their cheapness... It was here, we believe, that purchasers were allowed to dip in a sack for old wigs -- a penny a dip."

In his Every-Day Book (1826) William Hone describes the activities of Sir Jeffrey Dunstan (c1759-96), "a dwarf with knock knees and a disproportionately large head" who "earned his living by supplying dealers with second-hand wigs":

When Sir Jeffery raised the cry of 'old wigs', the collecting of which formed his chief occupation, he had a peculiarly droll way of clapping his hand to his mouth, and he called 'old wigs, wigs, wigs!' in every doorway. Some he disposed of privately, the rest he sold to the dealers in 'Rag-fair'. In those days, 'full bottoms' were worn by almost every person, and it was no uncommon thing to hear sea-faring persons, or others exposed to the cold, exclaim, "Well, winter's at hand, and I must e'en go to Rosemary-lane, and have a dip for a wig." This 'dipping for wigs' was nothing more than putting your hand into a large barrel and pulling one up; if you liked it you paid your shilling, if not, you dipped again, and paid sixpence more, and so on. Then, also, the curriers used them for cleaning the waste, &c. off the leather, and I have no doubt would use them now if they could get them.

Thomas Rowlandson's drawing of Rag Fair shows a busy street scene bustling with traders and buyers with clothes littering the ground, hanging from windows and suspended from poles protruding from upper-floor windows. 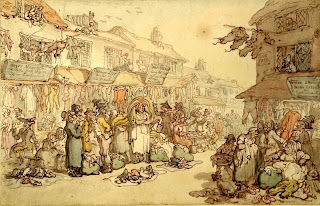 It seems the LCS connection with the Fourteen Steps was a brief one. It only appears once in the LCS records, in the spy report by Powell, and there it appears as a site which the LCS was moving away from. Precisely why the LCS had to remove from this area can only be a matter of speculation. Perhaps by September 1795 the LCS was sufficiently disreputable that they couldn't be accommodated even in Rosemary Lane.  Or perhaps the LCS no longer wanted to be associated with an area so closely associated with criminal activity. Regardless, the Fourteen Steps, is characteristic of the kind of "low" alehouse that the LCS divisions often met in, that has left only the slightest trace on the historical record.