At a meeting of the LCS General Committee on 13 August 1795 it was reported that a letter had been received from Thomas Holmes of Division 27 stating "We wish to form a division on 16 July at 2pm at the Fox and Hounds, Sydenham, Kent." The new division was to be  number 52, and several of the leaders of the LCS -- Hodgson, Haselden, Place, Higgins, B. Binns, Saml Smith, Morris, and Dyer were to attend.


There remains a pub, called Fox's, on the site of the Fox and Hounds, on the corner of present day Wells Park Road and Kirkdale. The current building was erected in the 1880s to designs by Thomas Haliburton Smith, and was notable for its saloon bar -- one of the first of its kind -- which has since been demolished.
There was a Fox and Hounds on the site, much earlier than this, as shown on Stanford's Library Map of London and it's Suburbs from 1862. 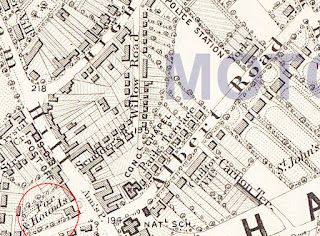 No image of the first building remains, however, and there is much confusion over when it was built. One local historian claims that "The Fox and Hounds was first licensed in 1826, and was thus one one the earliest buildings in the High Street." The mention of it in the LCS records, however, suggests that it predated this "first licensing" by at least thirty years. The LCS records are not the only evidence of the earlier existence of the Fox and Hounds, however, on 17 September 1798, a Robert Phillips took out a classified advertisement in the Morning Post and Gazetteer, complaining of a horse that had been left at the Fox and Hounds nearly a year previously, which he had been forced to look after at his own expense.

There is also mention of a "Fox and Hounds" on Sydenham Common, Lewisham in a document dating from 10 July 1769, when it was described as a house belonging to William Cooper (Kent History and Library Center, Lewisham  Q/RH/1/5W 1769). Other descriptions of Sydenham Common dating from the same period suggest that there were very few buildings in this area at the time, suggesting that the town of Sydenham was developed around the original Fox and Hounds building. It's population grew considerably in the nineteenth century, after the opening of the canal 1801. In 1854 the Crystal Palace, originally erected to house the Great Exhibition in Hyde Park, was moved to Sydenham.