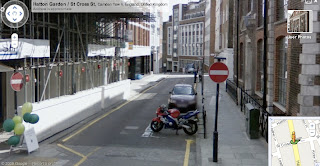 On 14 May 1794, two days after Thomas Hardy's arrest, Spy Gosling went for the second time to a meeting at the Coach and Horses on Cross Street, Hatton Garden. This was a particularly tense time for the LCS, and the society was undergoing internal debate about whether they should be arming, or whether they should continue on their present non-violent path. Spy Gosling took particular delight in exposing the violent tendencies of the the society to the government, which make his accounts especially colorful though of suspect accuracy:

In the evening I went to the Society at Cross Street Hatton Garden where I had been once before.* The delegate apologized. for not having bought the Resolutions of the Committee with him - he said he believed they were taken with Thelwall and were to the following purport -

These three Resolutions were put and carried with a degree of Enthusiasm I had never before witness in their Meetings and many of them declared that the Day any of the Members should be bought to Punishement for what they had done in their Cause they would die or save them. - After the meeting was thinned the Landlord asked us to remove to the Tap Room as it was late, which we did - he gave us a Reason that he had received a Caution from Mr. Bleamire the Magistrate but said he did not fear him for the Officers were his Friends and he had always something for them to eat and drink... The Conversation of the Delegate and his Father was particularly Violent the Father wised to see Temple Bar covered with Heads - and the Son to see a head on every Lamp Iron about London Bridge... Much other conversation passed about Arming and the Society, in which it was stated that many in the Army and Militia belonged to the Society but that their names were never entered... Previous to our coming down Stairs a Member handed a New Cutlass or Hanger across the Table to another who put it under his Coat saying "these are the Things but the Scabbard is hardly dry.

* About 40 or 50 were at this meeting in the Coach and Horse ph. Late in the evening songs were sung. Gosling who stayed until midnight, described the delegate as 'quite a Lad.'

TS/11/954/3498; Thale p164
This gives further evidence of the kinds of pressure that landlords were being put under at the time, and the ways that landlords, whose sympathies were with the LCS, were able to dodge those pressures. Furthermore it gives some sense of the layout of the Coach and Horses, which, according to this account, had a public bar downstairs, and a more secluded Taproom upstairs to which the landlord and chosen guests could repair for more private conversation. 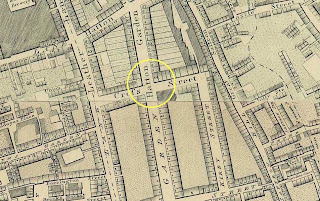 In March 1797 a dinner was also held at the Coach and Horses as a fundraiser to releive the debts of the LCS (see Thale p392 fn 11).

Cross Street (now known as St Cross Street) is now a small one-way street located just north of High Holborn, near the Saffron Hill area that Dickens used as the setting for Fagin's lair in Oliver Twist. The site of the Coach and Horses is now the headquarters of the chemicals company Johnson Matthey.
Posted by Pub Hunter at 11:37 AM