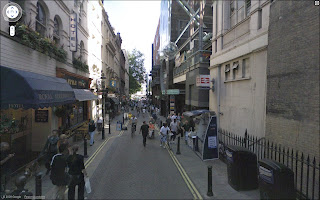 The Cock and Crown was the first public house that George Munro visited when he began to spy on the activities of the LCS. His first spy report begins thus:

The first Club I visited was the Cock and Crown kept by one Burton at the corner of Cock Court Villiers Street, this Society meets for what they are pleased to term the reformation of Government and particularly a more equal representation in Parliament, it is the fiteenth Division and sends one Deligate to the Society of Deligates, which notwithstanding every art I used, I could not learn when it was held. the person I spoke most to was the only man in the Club hat had common information, he was young and told me he was the Deligate of the Society he had a large bundle of papers before him which he would not open till I was gone and would not admit me a member without being proposed, and recommended by two of the Members; he however as will as the rest of the members was extremely civil, the whole of them except the Deligate appeared to me to be the very lowest tradesmen, they were all smoaking pipes and drinking porter.
TS 11/959/3505; Thale p27

Munro is a particularly interesting spy. He was a captain in the army and worked as a spy for the British government, spending much time in Paris reporting back to Lord Grenville the activities of the British Colony in Paris in the ealy 1790s. He provided testimony for the trial of John Frost (see John Barrell The Spirit of Despotism, (2006) p78) and reported on a famous celebratory dinner in White's Hotel in Paris in 1792 which was attended by Paine, Robert Merry, John Oswald, John Hurford Stone, and possibly Helen Maria Williams (see David Erdman, Commerce des Lumieres: John Oswald and the British Colony in Paris 1790-1793, (1986) p242-3). His particular emphasis on the low condition of the members of the LCS reveals the marked contrast he must have found between the Anglo-American radical community in Paris and the tradesmen and Shoemakers he found in the alehouses of London. 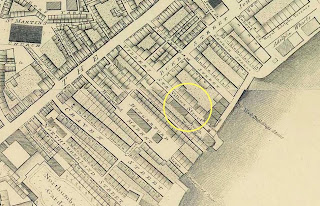 There is no Cock Court marked on Horwood's map anywhere near Villiers Street, nor have I been able to find any record of it, or a Cock and Crown public house in the vicinity. There are a number of other Cock Courts marked on Horwood's map, one near Smithfield Market, off Snow Hill; one off New Street, near Golden Square; another off Ludgate Hill, by St Paul's Cathedral; one off wood street, near London Wall; and finally one off Jewry Street near Aldgate. Which, if any of these, was the sight of Munro's visit it is difficult to know. Villiers Street itself was part of the Buckingham Estate, and contained a number of impressive residences, the majority dating to 1674-5 (see the Survey of London, vol 18): "The whole of the west side of Villiers Street was pulled down circa 1862–5 in connection with the formation of Charing Cross Railway Station... In 1712 Sir Richard Steele became the tenant of a house a few doors from the lower end of Villiers Street on the west side, and fitted up part of it as a concert room to seat 200 people... The greater part of the Spectator was produced during the period of Steele's residence in Villiers Street (1712–24). He seems frequently to have used the concert room for social and literary gatherings as well as for music."
View London Corresponding Society Meeting Places in a larger map
Posted by Pub Hunter at 8:19 PM