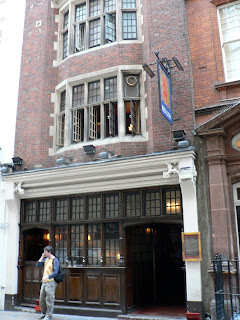 Ten months after the LCS first met in the Bell on Exeter Street, the society was big enough and disturbing enough to have attracted the attention of the government. By November 1792 spies such as George Munro, George Lynam, and Christopher Kennedy had infiltrated the society and were regularly feeding information to government officials. It was in this context that division 21 met in the Red Lion on Kings Street, near Golden Square on 26 November 1792. This may have been the only meeting of the LCS in this alehouse, and we know little about what happened there except that John Prothero was elected delegate to the LCS General Committee (see TS 11/958/3503; Thale 88). It is nevertheless a significant meeting because the Red Lion still stands at the same location and is still serving beer.

The building from which the Red Lion operates was originally built in the 1720s as part of the development of the Lowndes Estate. Kings Street developed out of the foot-path from Piccadilly to St. Marylebone, which ran through Six Acre Close and which marked the boundary between William Lowndes's land to the east and that of Lewis Maidwell, Dr. Tenison and Thomas Beak to the west. The houses on the east side of King Street, on the Lowndes estate, were built by Richard Tyler between 1688 and 1693 and rebuilt in the 1720's (see Survey of London 31, Ch XI, p. 176-195).

John Strype described Kings Street in the 1720s, as follows:

King street cometh out of Beak-street and Silver-street, and runneth Northwards to the Road: It is a pretty good Street, having divers very good Houses fit for Gentry. On the West Side is the Chapel of Ease, by some called, The Tabernacle; near unto which is Hide's Court, of small Account. On the East Side is Cross-street, ordinarily built and inhabited; which falls into Carnaby street. And farther Northwards is another Passage into the upper End of Carnaby-street, and another into Swallow street, by Mr. Medwell's, a fine, large, and well built House, with a curious Garden before it. Then farther Northwards is a good Bowling Alley, well resorted unto.

The buildings on the west side of the street were all destroyed during the development of John Nash’s Regent’s Street which cut through the seventeenth and eighteenth-century street plan with the express intention of drawing a “Line of Separation between the inhabitants of the first classes of society and those of the inferior classes” (see John Barrell The Spirit of Despotism p. 25-6). The name of the street was changed from Kings Street to Kingly Street in 1906. Today the buildings on the west side of Kingly Street are the recently renovated backs of the tall blocks fronting on to Regent Street. The east side of the street narrowly escaped the Regency redevelopment, and thus marks the boundary of what Nash regarded as “the narrow Streets and meaner houses occupied by mechanics and the trading part of the community.” Most of the buildings on the east side of the street, including the Red Lion, are the buildings that were built in the 1720s, although the original exteriors have undergone a great deal of remodeling from the nineteenth century onwards, largely to accommodate the preferred model of ground storey shops with houses above them. 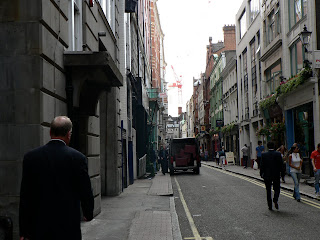 While it is true that the Red Lion still exists on the same site, it is almost certainly unrecognizable from its original form. The old wooden paneling that adorns the front of the pub most likely dates from the nineteenth century when the house, which would have originally been built as a domestic residence (as most alehouses were) was converted into a shop-like establishment to reflect the trend that developed in the early nineteenth-century to present alehouses as retail spaces. The large bay windows that dominate the front of the upper stories would again have been a later external embellishment from the original flat front, most likely added in the 1820s when bay windows became increasingly popular, and provided additional seating for customers. 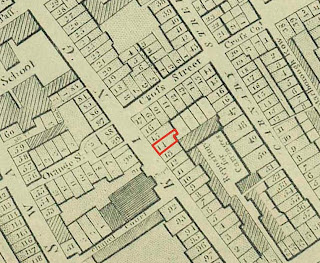 Inside the pub the interior is dominated by a large horseshoe-shaped bar, with a wooden pot shelf on which glasses are stored when not in use. This would also have been a much later addition. In the eighteenth-century "bars" were generally storage rooms in which drinks and drinking vessels were stored. Customers would have been served in their seats, with the serving staff bringing drinks in jugs from the storage room. The development of the modern counter bar occurred in the 1820s and 1830s, and was a practice borrowed from dram shops and gin palaces. The idea of the counter bar as a place of surveillance, from which the landlord could observe his customers in the various rooms of the pub, a function that the horseshoe-shaped bar in the Red Lion enables, is a later development again, and evolved alongside the Victorian penchant for dividing the space of the pub up into several small spaces to ensure the privacy of customers.

The Red Lion, which is currently operated by the Samuel Smiths brewery, demonstrates the extent to which what we think of now as a pub is essentially a Victorian invention. The characteristics that we associate with old public houses, are not necessarily as old as we might think. Nevertheless the fact that the Red Lion has been operating on the same site for nearly three hundred years, through the various changes in taste goes to demonstrate the adaptability of the pub, and indeed the pressures exerted on landlords to keep abreast of recent developments. While there is still a long way to go on the pub hunt, and there may be more LCS pubs to discover, the scarcity of these eighteenth-century alehouses demonstrates the difficulty, and indeed the expense, of adapting to these changes in opinion. This makes the Red Lion a rare and valuable survivor. Despite the fact that it is difficult to detect the eighteenth-century origins of the pub beneath the layers of history, it remains a valuable testament to the complex cultural and social history of London.