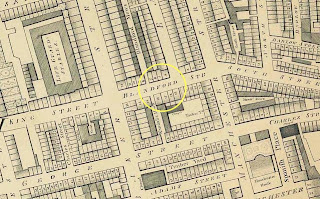 The minutes of a meeting of the LCS General Committee on 6 August 1795 record that:

27 Branches to the Cock Blandford St Manchester Sqre Tuesday To be No 45 - Dixey, Brewer McGuire.

The Cock has left little trace in the history books but in the 1790s Blandford Street was a short street that began at Baker Street and went as far as Manchester Street. Today the street has many eighteenth-century houses on both sides of the street, most of which are used as retail outlets, which suggests that the building the Cock occupied may well still be standing, though I have not been able to track down which of the buildings it was in. Elsewhere on Blandford Street, Michael Faraday worked as an errand boy in a bookbinders from 1804.