9, Piccadilly was the home and workplace of shoemaker and LCS founder Thomas Hardy and his wife from 1791 until 1794. The house stood on the site now occupied by the Shaftesbury Monument Memorial Fountain in Piccadilly Circus. Olaudah Equiano lived here with the Hardys in 1792. 6 doors down from Hardy's house (to the East) lived the printseller WS Fore, who had published a number of prints by James Gillray, including "The Hopes of the Party Prior to July 14" (see Crown and Anchor). 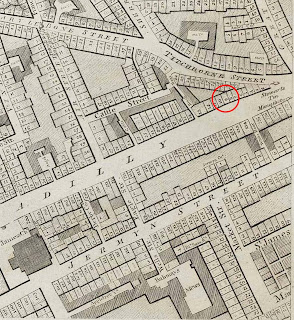 The house was raided in 1794 as the leaders of the LCS were put on trial for treason. Hardy's wife was at home pregnant at the time of the raid. She died in childbirth on 27 August 1794, and many considered her death a martyrdom for the sufferings of her husband.

From the "Memoir of Thomas Hardy":
On the memorable 12th of May, 1794, at half-past six o'clock in the morning, Mr. Lazun, junior, the son of the King's messenger, as a reward for his activity on that occasion, gave a thundering knock at the door, No. 9 Piccadilly, before the shop was opened; and Hardy, having no suspicion of what had been prepared for him, jumped out of bed, and went, half-dressed, to see what could be the matter at that early hour. Upon the door being opened, Lazun rushed in, followed by John Gurnel, the King's messenger, P. Macmanus, and John Townsend, Bow Street officers -- better known by the appellation of thief takers -- Mr. John King, private secretary to Mr. Dundas, and two or three others whose names Hardy did not learn. Lazurus seized him, and proceeeded to search his pockets, where he found some letters and papers, besdes his pocket book, containing two bills of exchange to the amount of £196. Hardy desired to know by what authority he was thus treated, when Lazun showed him a paper, which he called a warrant for his apprehension, on a charge of High Treason; but before he could read more than a few lines, the young upstart in authority, re-folded, and put it again in his pocket. He observed, however, something about Hight Treason, connected with his own name, but had not an opportunity then of observing by whom it was signed.
Lazun was very active in rumaging all the drawers, even those containing Mrs Hardy's clothes. He remanded the key of a bureau, which happened to be locked, and when he found he could not obtain it, he threatened to break it, and proceeded to put his threat in execution by trying to force it open with the poker.