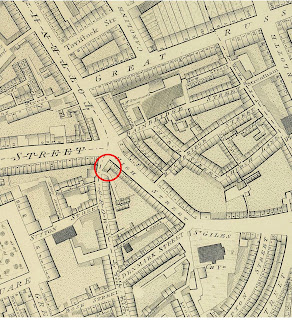 On 13 August 1795 (General Committee; James Powell, chair) it was reported that Division 26 were no longer able to meet at their previous meeting place and would move to the Angel: "Citn Moggeridge stated that the Justices had terrified the Landlord were Divn 26 meet that he would not let them meet there any longer - they had therefore moved to the Angel High St St Giles" (Add MSS 27813, fos. 101v-7v).

High Street was effectively demolished during the building of Charing Cross Road in 1877. This area, and in particular Crown Street, which ran parallel to High Street was renowned for the number of inns. In 1720 Stype described the area as 'very ordinary' and 'a Place not over well built or inhabited' (London Survey 33, 192).

The History of Pubs in London lists a house called the Angel at 61, High St. This would place the Angel on the corner of present day Oxford Street and Tottenham Court Road, approximately on the site of where Dionysus, a Greek restaurant, currently stands.