Spy Kennedy reported that Division 7 met at the Black Dog in November 1792. Maurice Margarot -- who would later get convicted and transported to Australia for his participation in the Edinburgh Convention of 1793 -- was the delegate.

Edward Walford, in his 1878 Old and New London reports that Oxford Market was erected in 1721. It was called by the painter Barry "the most classic of London markets;" but according to Walford, "it is certainly difficult to see in what its "classic" nature consists. It was originally a plain hexagonal structure, mostly of wood; this was pulled down, either entirely or to a great extent, about the year 1815, when it was rebuilt, small dwelling-rooms above being added to the shops below." In February, 1876, the site of the market was disposed of by public auction, the property being purchased for £27,500 by Messrs. Louise and Co. 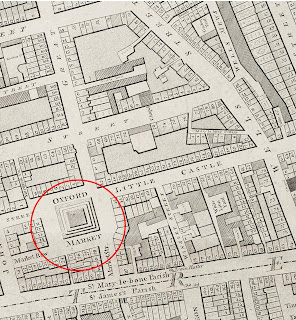