The Journal of the LCS General Committee, contains the following on Thursday 20th September, 1792:

"James Black Delegate of Division No. 8 informed the Committee that their Landlord of the Blue Posts, in the Hay-market had been threatened with the loss of his licence of he permitted the Division to assemble any longer in his house. Accordingly they moved to the Rising Sun in Bedford Bury" (Add MSS 27812, fos 20-2v; Thale 20).

The Pigot's directory of London Pubs from 1839 lists two Blue Posts on the Haymarket, one at number 59, one at 23. Horwood's map meanwhile shows four public houses on this street, the Bell, the Black Horse, the Cock, and the George none of which were known meeting places of the LCS. This points to the fact that Horwood marks only "reputable" public houses on his map, or at least sufficiently large taverns, whereas the LCS tended to meet in smaller alehouses. Most of these alehouses would not have been distinct from the other residential houses on the street, except for the presence of their sign. Indeed typically alehouses would have been the homes of the landlords, with patrons simply invited to sit in the "kitchen." Beer would have been served to guests out of jugs, which were used to bring beer in from the brewhouse -- bars being a later innovation. The listing of four larger taverns on Haymarket, on a street with only about eighty houses, plus at least two alehouses by the name of the Blue Posts, gives some indication of the sheer quantity of public houses in the late eighteenth century London. 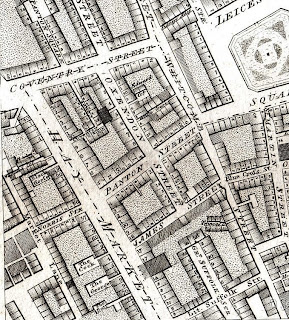