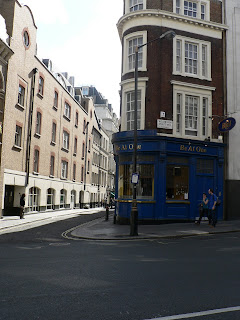 The Bell, which housed the inaugural meeting of the LCS, stood on the Northwest corner of Wellington Street and Exeter Street. Most of the houses here were rebuilt in 1732, but none of these buildings remain standing. The Bell Tavern stood on part of the site now occupied by Be At One. The current building on the site was built in 1835 as the Old Bell pub (Survey of London 36, 225-6). 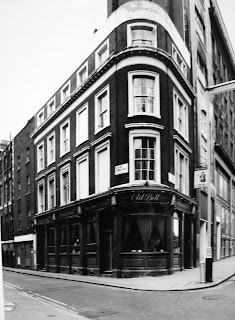 Thomas Hardy gave an account of the first meeting in a series of letters he wrote to Francis Place:

This plan of a society I read to an intimate acquaintance who approved of it, and a few days afterwards two more friends and him met me at supper where I took the opportunity of reading it to them. They all were pleased with it as a groundwork. And t being a new thing we were anxious to put it into practice. I proposed that we should have a meeting next Monday night at a public house the sign of the Bell in Exeter St. strand. It was agreed to, and each of us was to invite as many of our acquaintance as we thought would agree to the measure. Mr. Boyd the Landlord with whom I was acquainted, and who I knew was a friend to freedom was quite agreeable that a society for a reform of parliament should meet at his house... This meeting of the society took place after the evening of the 25th Ja. 1792. After the business of the day was ended they retired as was customary for tradesmen to do to a public house and after supper conversation folllowed, condoling with each other on the miserable an wretched state the people were reduced to , merely as we belived, from the want of a fair, and equal representation in the commons house of parliament. (Add MSS 27814, fos. 1-38)

In the beginning of January, 1792, the first meeting was held at the sign of the Bell, in Exeter Street, in the Strand, when there were present only nine persons, all acquainted with each other. They had finished their daily labour, and met there by appointment. After having had their bread a cheese and porter for supper, as usual, and their pipes afterwards, with some conversation on the hardness of the times and the dearness of all the necessaries of life, which they, in common with their fellow citizens, felt to their sorrow, the business for which they had met was brought forward -- Parliamentary Reform -- an important subject to be deliberated upon, and dealt with by such a class of men. (Memoir of Thomas Hardy, 1832, 13)

According to spy Lynam, the LCS moved on from the Bell because the landlord Robert Boyd was scared of losing his license (TS 11/959/3505; Thale 26), though they must have continued meeting there for a number of weeks as the First Address (April 1792) is addressed from the alehouse. 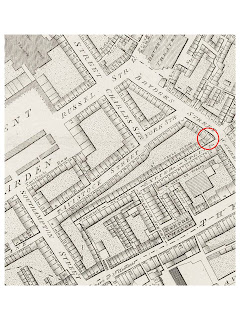 View LCS Pubs in a larger map
Posted by Pub Hunter at 11:13 PM