In the minutes to a meeting of an LCS General Committee, held on 6 August 1795 the delegates heard that "Ben Jonsons Head Westmoreland Buildings Aldersgate St" was one of a number of houses that "wished to have Divns opened in them" (Add MSS 27813, fos 94-101; Thale 280). The following week, at another meeting of the General Committee, it was announced that Div 3 would branch and would become Div 50, to meet at "Ben Jonsons head Westmorland Buildings" (Add MSS 27813, fos 101v-7v; Thale 285). Spy Powell also notes this in his report of 13 August and adds "French, Gibbons, Read & Hewitt to open it" (PC 1/23/A38).

In September, during a discussion of how to manage the General Committee better, Div 50 made a proposal, and was quite careful to distinguish its autonomy from Div 3, the parent division. Thale reports:

"The covering letter, headed, 'Plan for Printing Reports. From Div. 50. By the Secretary, a Compositor' and signed 'John Franklin Kennington. Secretary to Vivision 50 No 2 Ben Johnsons Head Westmorland Buildings Aldersgate Street. Branched with & from No 3. Lord Cobham's Head, Clerkenwell', asks that the plan be introduced as that of Div. 50, not of Kennington, who last year had an information filed against him for publishing (under the name of Hunter) a weekly 2d pamphlet called the Gleaner." 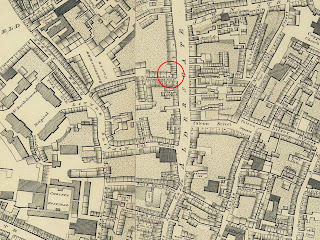