"Informed by the Assist Secretary that Citn Moody had applied to the Ex Com to establish a Divn at the Blue Posts Brewer Street Golden Sqre the Ex Com had given him the No 31. & requested the Genl Comee to appoint a Deputation & they Deputed Binns Wilson, Salter Mirfin Lemaitre --"

I have been unable to track down much information about the Blue Posts, in part because it is a popular name for pubs in Soho, in part because -- as the name suggests -- Brewer Street was originally the site of two breweries, and there have consequently been a great many pubs on the street, so it's hard to narrow it down to a particular location.

The popularity of the name has often been attributed to the fact that blue posts once demarcated the boundary of a royal hunting ground (the name Soho itself being taken from a hunting cry). It seems more likely, however, to derive from the practice of painting posts blue as an advertisement for sedan chairs, which could be hired from houses sporting azure poles.

According to the Survey of London Brewer Street is first mentioned by name in the ratebooks in 1675. "In the early eighteenth century it was occasionally referred to as Wells Street, presumably from the building activities there of John Wells. The street clearly owes its present name to the breweries on its north side, Ayre's Brewery built in c. 1664 and Davis's Brewery built in 1671–4. Brewer Street and its immediate vicinity was evidently a centre for noxious trades, for the western end was at first sometimes called Gunpowder or Powder Street, presumably in allusion to the saltpetre house which stood at the other end of the street in Colman Hedge Close, while Glasshouse Street nearby may suggest the existence of a glass manufactory there." 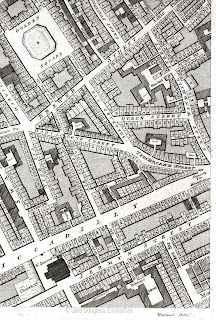