On 16 July 1795 it was announced to the LCS General Committee (Citn Beck in the chair) that division 12 had branched off "to the Black horse corner of Fishmonger Alley High Street Borough." The new division was assigned to be number 15, and Yates, Ramsay, Price and Dukes were appointed to be the deputies (Add MSS 27813, fos. 69v-76; Thale 264). Spy Powell's report on the meeting also reported that Div 12 were "To branch off to the Blackhorse Fishmongers Alley Borough to meet on Monday" (PC 1/12/A38; Thale 267). 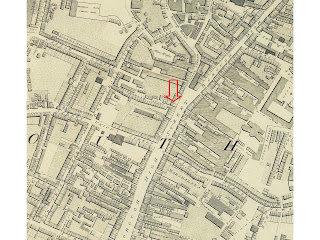 Fishmongers Alley no longer exists, though the image at the top of this entry, reproduced from the Survey of London is an illustration by Buckler, in the Guildhall Library (1827). (This shows the alley, looking east from High Street towards Redcross Street). The Survey of London (1950) offers the following infomation on Fishmonger's Alley: "This small court turns out of Borough High Street between Nos. 62 and 64. In the time of Henry VIII this alley and the surrounding property belonged to the Fishmongers' Company who sold it to various tenants in 1554–5. The name Fishmongers' Alley survived until circa 1835, when it was changed to St. Margaret's Court." Margaret Court no longer exists, though 62 Borough High Street still bares its name, and is currently the home to the victim support office of the Services for Refugee and Asylum Seekers in Southwark.