The minutes of the LCS General Committee for the 13 August 1795, contain the following wonderfully sarcastic note detailing why Div. 29 were forced to move to the Bricklayers Arms:

29 - Are compelled by their Landlord to change their night of Meeting from Monday to Tuesday & was obliged for that Evening to meet in an upper Bed Room to accommodate a Society of Loyal Britons or a club of Church & Kings men who have taken our late meeting Room. The Landlord therefore obliged us to evacuate the same, during the whole Evening Citizens our Senses were charmed with those melodious Notes of God Save the king, rule Brittania Briton strike home &c &c &c - But those tunes not being quite in unison with the undermentioned Citizens they therefore determined to branch of to form a new Division to meet on a Monday at the Bricklayers Arms Kingsgate Bloomsbury & request the Comee to appoint a Number & Deputation to open the Same -
The Citns who are here present have set down their Names
Turner Stacey Skale Stone Wenham Hanbury Sherman Anderson Parkinson Flyill
To be No 51 - Banting Powell, Place - Monday (Add MSS 27813, fos. 101v-7v; Thale 285).

This description shows some of the pressures that the LCS were under which forced them to abandon certain meeting places, and eventually led to the collapse of the society. Typically pressure was exerted on sympathetic landlords, who were threatened with having their licenses revoked if they allowed the LCS to continue meeting. Here, however, pressure was exerted much more directly by members of the public who sought to drown out the political voices of the LCS, with their own patriotic songs. 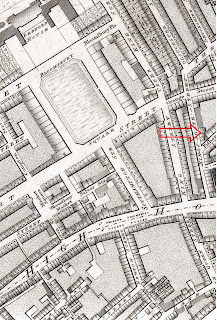 The 1839 Pigots Directory lists The Bricklayers Arms at 22 Kingsgate Street. Kingsgate Street was approximately where the southbound carriageway of Southhampton Row is today.