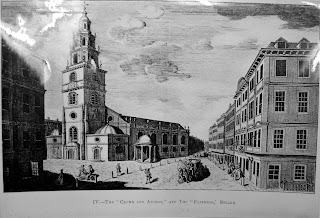 Image from the Creed Collection, held at the Guildhall Library, London EC2
View looking east down the Strand, showing the Strand entrance to the Crown and Anchor, opposite St Clement's church.


The original Crown and Anchor building had associations with Samuel Johnson, though it had been rebuilt in 1790 and was able to accommodate much larger meetings. In the nineteenth-century the tavern became the home of the Dick Whittington Club until it burned down in 1857.
Both Coleridge and Hazlitt gave lecture series here in 1818. It subsequently existed as The Temple Club, The Academy of Ancient Music and a branch of WHSmiths.

In the 1790s the tavern was heavily associated with those campaigning for political reform, though in reality it also housed many loyalist meetings, including the Crown and Anchor Society, or "the Association for the Preservation of Liberty and Property against Republicans and Levellers." 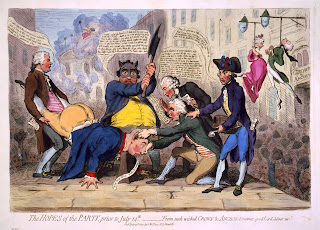 The Crown and Anchor featured prominently in a number of political satires of the 1790s. James Gillray in particular frequently associated it with sympathizers to the French Revolution. In his print The Hopes Of The Party Prior to July 14th (1791), a mob gathers outside the Crown and Anchor to watch a number of well-known reformers assassinate the king, as the queen and the prime minister William Pitt hang from the lampposts of the tavern.

A dinner celebrating the the anniversary of the fall of the Bastille had been held in the Crown and Anchor on 14th July 1791, five days before the publication of James Gillray's satire. Neither Charles Fox, nor Richard Brindsley Sheridan had attended this meeting, but this held no deterrent for Gillray who depicts Fox poised to chop off George III's head, while Sheridan holds his ear to keep him still. The King is shown with a shaved head and is clearly still insane, oblivious as Horne Tooke hoists the King up and presses into him. The obscene sexual implications of Tooke's posture are echoed in the positions of William Pitt and Queen Charlotte who hang from the lampposts of the Crown and Anchor, their bodies jerking into sexual proximity. Joseph Priestley meanwhile offers words of condolence and Sir Cecil Wray politely asks Priestley to get out of the way so that he can catch the "small beer" when it is tapped. Small beer was the beer taken from the third running of a brewers mash - the first runnings would go to a stronger beer, the second for ordinary beer. The small beer was weak and frequently that given to servants, fieldworkers or the poor. Wray's comments about small beer, combined with the barrel he carries to catch it in may be a comment about Wray's status compared with the other figures on the stage, equally it may be a comment about the quality of the Hanovarian king's blood. Tooke, Priestly and Wray each have political pamphlets either in their hands or in their pockets.

Here's the description of the print from M. Dorothy George's Catalogue of Political and Personal Satires in the British Museum, VI, 1938:

A scaffold extends across the foreground: Fox raises an axe to strike the neck of George III, whose head is held by Sheridan. The scaffold is surrounded by a dense and cheering mob. On the right is the gate of the 'Crown & Anchor' tavern, and from two projecting lamp-brackets swing the bodies of Queen Charlotte and Pitt. The houses of the Strand recede in perspective and terminate in Temple Bar, with two heads on spikes; clouds of smoke appear to come from burning houses east of Temple Bar. On the clouds a meretricious Liberty sits enthroned and triumphant.
The King's neck rests on a narrow block, his shaved head appears bald, his legs are held up by Horne Tooke, who stands on the left, saying:

"O, such a day as this, so renown'd so victorious,
Such a day as this was never seen
Revolutionists so gay; - while Aristocrats notorious,
Tremble at the universal glee."

From Tooke's pocket projects a paper: 'Petition of Horne Tooke' (against the return of Fox and Hood for Westminster, see BMSat 7690). The King, who supports himself on his hands, says, "What! What! What! - what's the matter now". Fox, enormously stout, straddles behind the King, full face his axe raised in both hands; he wears a mask with large circular eye-holes and fox's ears; he says: "Zounds! what the devil is it that puts me into such a hell of a Funk? - damn it, it is but giving one good blow, & all is settled! - but what if I should miss my aim! - ah! it's the fear of that which makes me stink so! - & yet, damnation! what should I be afraid of? if I should not succeed, why nobody can find me out in this Mask, any more than the Man who chop'd the Calf's-head off, a Hundred & Forty Years ago - and so here goes!" Sheridan kneels in profile to the left holding the King by the ear and nose, he looks up at Fox with a sinister scowl, saying, "Hell & Damnation, dont be afraid give a home stroke, & then throw off the Mask - Zounds, I wish I had hold of the Hatchet."
Priestley, behind Sheridan, leans towards the King, saying, "Don't be alarmed at your situation, my dear Brother; we must all dye once; and, therefore what does it signify whether we dye today or tomorrow - in fact, a Man ought to be glad of the opportunity of dying, if by that means he can serve his Country, in bringing about a glorious Revolution: - & as to your Soul, or any thing after death don't trouble yourself about that; depend on it, the Idea of a future state, is all an imposition: & as every thing here is vanity & vexation of spirit, you should therefore rejoice at the moment which will render you easy & quiet". He holds a paper: 'Priestley on a Future State'. Sir Cecil Wray stands with his right hand on Sheridan's shoulder, saying, "Here do give me a little room Joseph that I may be in readiness to catch the droppings of the Small Beer when it is tapp'd; I never can bear to see the Small Beer wasted Joseph!" He holds in his left hand a small cask, 'For Small Beer', and a large pipe; in his pocket is a paper: 'Plan of Chelsea Hospital by Sir Ceci[l] Wray'. The Queen is cruelly caricatured; she swings against Pitt, who is in a death agony with crisped fingers. 19 July 1791 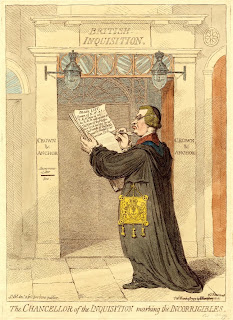 The Crown and Anchor also feature promently in Gillray's The chancellor of the inquisition marking the incorrigibles. George's description once again: "Burke, writing as he walks, advances towards the door of the 'Crown & Anchor' tavern, over which is inscribed 'British Inquisition'. He wears a skull-cap and long legal robe, from his waist hangs a bag like that of the Great Seal, on which the royal arms are replaced by a crown and anchor and having a skull at each corner. His head is in profile to the left and he scowls with fiercely protruding lips. He holds up a large sheaf of paper headed 'Black List', his pen touching the last word of the inscription (a parody of Richard III): 'Beware of N--rf--k! --P--tl--d loves us not! - The R--ss--l's will not join us The Man of the People [Fox] has lived too long for us! The Friends of the People must be blasted by us! Sherridan, Ersk[ine].' On one of the door-posts is a narrow slit inscribed 'Anonymous - Letter Box'. The door of the famous tavern appears to be correctly depicted, but its lamps are surmounted by royal crowns. 19 March 1793"

A number of descriptions of the Crown and Anchor attest to its size and grandeur. According to E. Beresford Chancellor's Annals of the Strand (London, 1912) the tavern "contained one splendid room measuring no less than 84ft by 35ft" (333), and on Charles James Fox's birthday in 1798 two thousand reformers were said to have met in the tavern. 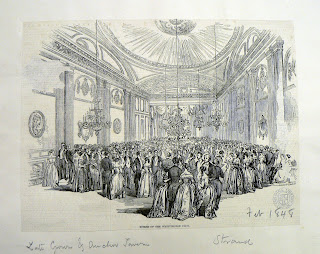 Another political satire, The Reformers' Dinner by Samuel de Wilde (1809), depicts the interior of the tavern, and attests to the continued importance of the Crown and Anchor for reformist projects into the nineteenth century. 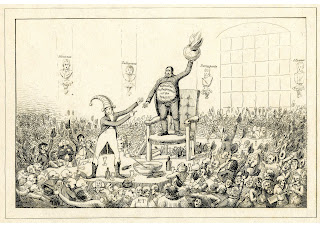 Initially the Crown and Anchor was too grand a place for the London Corresponding Society, which typically met at much smaller venues. On 6 June 1793, however, it was proposed that the Crown and Anchor might be used for a general meeting of all the divisions. Citizens A. Callander, J. Field, and M. Margarot were appointed to negotiate for the use of a room at the famous tavern (Add MSS 27812, fos 46-7; Thale 71). On 27 June they reported back to the General Committee that they had agreed "with the Master of the Crown and Anchor for the use of his Great Room on the 8th. July at the price of five Guineas." The Committee, clearly pleased with this coop, ordered that the sum be paid forthwith "in order to prevent any underhand maneuvres of the Enemies to Reform from taking place," indicating the atmosphere of suspicion and paranoia that the LCS operated under at the time (Add MSS 27812, fos 48-55; Thale 75). Between six and seven hundred members of the society attended the meeting on July 8th, which resulted in the publication of the Address to the Nation from the LCS.

On 2 May 1794 twenty or thirty members of the LCS were among the 350-400 diners who attended the Anniversary dinner of the Society for Constitutional Information which took place at the Crown and Anchor. These included Hardy, Thelwall, Richter, Lovett, Moore, Pearce, Jones and the spy Groves. Groves was given his ticket (which cost 7s 6d) by Hardy on the night before the dinner for free, which the government took to be a sign that the LCS was under the control of the SCI. Indeed there had always been a strong alliance between the LCS and the SCI, which regularly met at the Crown and Anchor, with the SCI admitting six LCS members as early as June 1792.

Horwood's map shows the Crown and Anchor a little way down from the Strand on Arundel Street. Though a long corridor provided entrance from both streets. 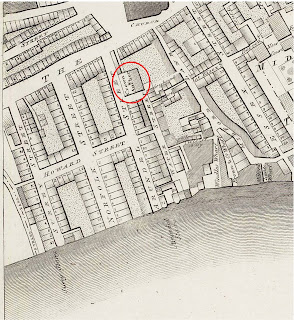 Recently on the site was an office building that held a branch of the HSBC bank. At 7 Arundel Street was Kay House, out of which King's College's Centre for Computing in the Humanities operates. 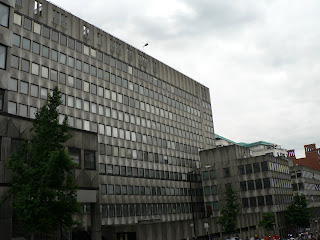 Update:
The office building was torn down in 2013. At the time of writing (May 2014), the site is being developed into a multi use residential development, called 190 Strand. Plans for the new development can be viewed on the 190 Strand website. 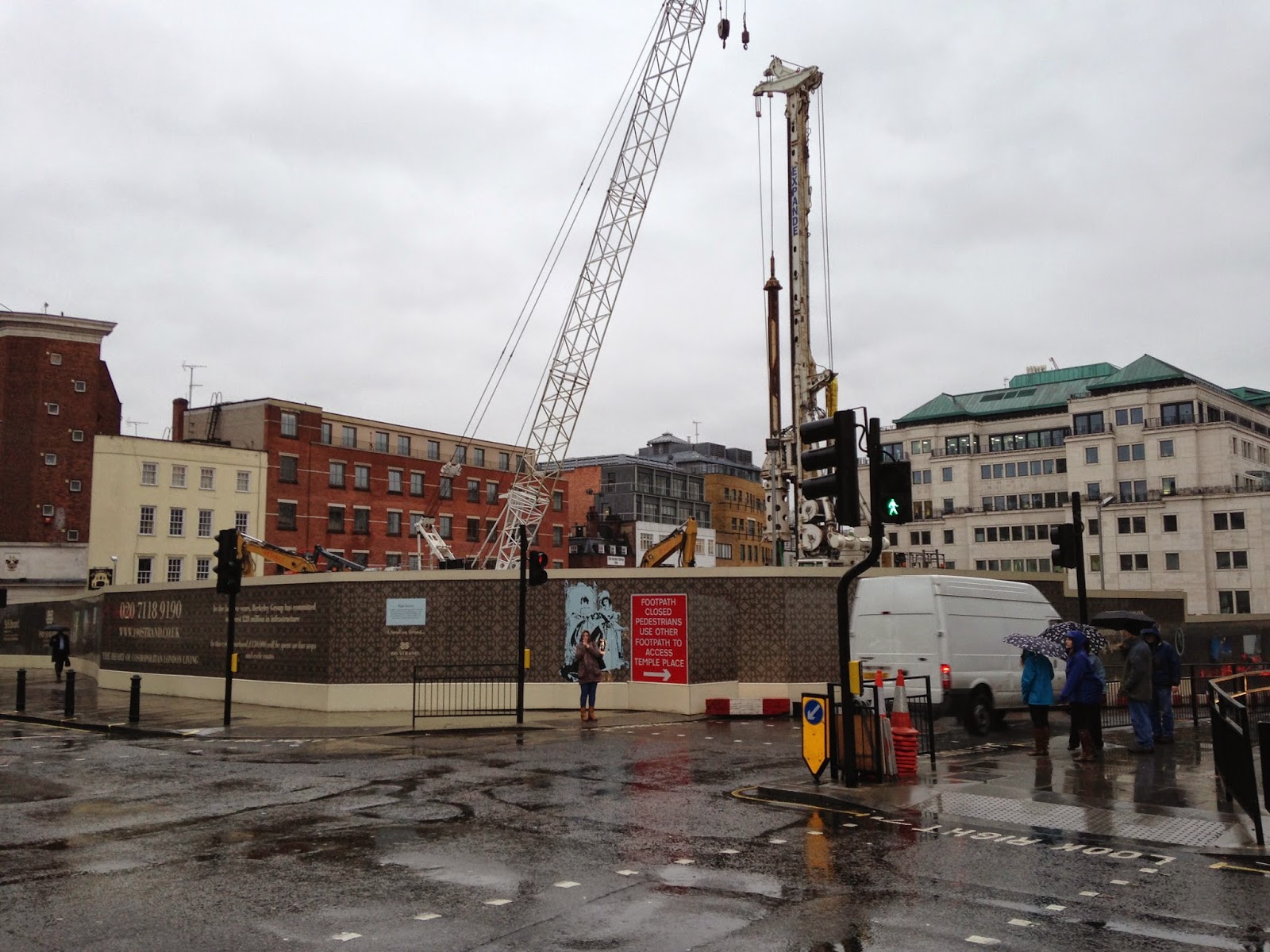