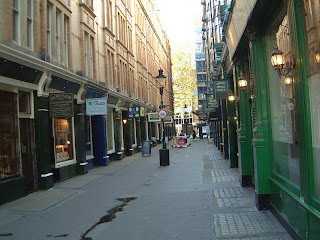 The first mention of Angel Court occurs in the minutes from a meeting of the LCS General Committee, 20 August 1795 (Citizen Beck in the chair). "Angel Court Cecil Court St Martins Lane" is listed as one of ten "houses" that "wish to have divisions." The implication is that the houses were approaching the LCS volunteering to have hold meetings -- presumably because there were men frequenting the alehouses that were sympathetic to the LCS cause. That is to say the meeting places came first, and then divisions were assigned to the venue. 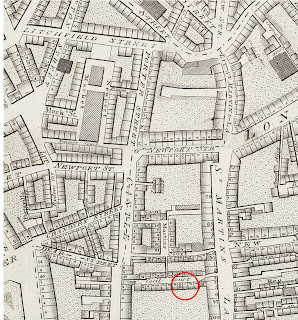 
At a meeting of the LCS General Commitee on 3 September 1795 (Francis Place, chair) it is revealed that Division 5 "Branches to the Angel Cecil Court St Martins Lane."

The Angel also features in William Hamilton Reid's The Rise and Dissolution of the Infidel Societies in the Metropolis (London, 1800), in which Reid lists it as one of the meeting places of the new breed of  clubs that spring up in the wake of the publication of Thomas Paine's The Age of Reason. Reid was himself a member of the LCS, and the "Infidel Societies" which he exposes in the Rise and Dissolution overlap with, but are not limited to, the LCS. His preoccupation is specifically with religious dissent (i.e. deist and atheist groups), and its political and social consequences:

The West end of the metropolis, having in the mean while attained to a degree of rivalship, in consequence of an association, in Wells-street, Oxford-road, where the members where permitted to recite their own productions; and another, on a Sunday evening, much more numerously attended, viz. the Angel, in Cecil-court, St. Martin's Lane. Those nearest the city were, in some measure, deserted; but, as they closed their debates sooner than those at the west end of the town, some of the speakers contrived to exhibit at two places on the same night: even the weather presented but few obstacles. The visionary expectation of a new order of things, it is presumed, often vibrated from the imaginations of the leading members to their fingers ends, and rendered them less sensible of the operations of the elements than the vulgar herd.


The Wells-street Society being dissolved, in consequence of some disagreement among the members, the whole focus of Deism and Atheism was concentrated at the Angel, in Cecil-court, St. Martin's Lane, where a mingled display of real talent and miserable imitation was continued, on the Sunday and Wednesday evenings, till February, 1709; when, without any previous notice from the Westminster-magistrates, as had been customary in the city, a period was put to this promising school; the whole of the members and others present, being apprehended, and the next day, obliged to find sureties for their appearance, to answer any complaint, at the next Quarter-Session, at Westminster; but no bill being found, the business ended with the withdrawing of the recognizances of the parties, 57 in number; which would certainly have been doubled, if the police-officers, sent to apprehend the club, had stayed till the business of the evening had commenced.

Reid concludes by pointing out that the Angel meetings were understood by magistrates as "wholly political," a circumstance he attributes to the "silly appellation of citizen, made use of by the members" and by the fact John Binns, one of the LCS leaders, was in attendance at the meeting which was broken up by police. The inference though is that while is was understood as a political meeting, it's main function and purpose was religious, i.e. it was responsible for the spread of atheist / deist ideas.

It is not clear where on Cecil Court the Angel was, though Cecil Court is a tiny street. The History of Pubs in London lists a pub called the Bell at 18 Cecil Court from the 1881 census. Assuming the street numbering remained unchanged this would have the Bell on the south side of the street, slightly nearer the St Martin's Lane end, approximately where Goldsboro Books stands now. Today, Cecil Court specializes in print- and antiquarian book shops.

Below is a from a watercolour by J. P. Emslie of the South side of Cecil Court in 1883, reproduced in The Survey of London Vol 20 ed. G. H. Gater and F. R. Hiorns. This volume does not cover Cecil Court in detail except to say that "In Cecil Court, on the west side of St. Martin's Lane, the child Mozart lodged in 1764 at the house of "Mr. Couzin hare cutter.""