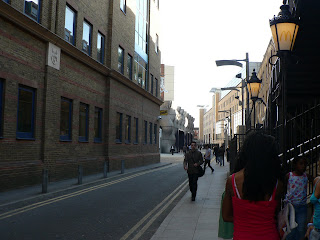 Reporting from a meeting of the General Committee on 9 July 1795, spy Powell reported that Div, 14 had moved their meeting place to the "Boatswain & Call Maze Pond Southwark" (PC 1/23/A38; Thale 263).

Maze Pond was a road that lay on the grounds owned by Guy's Hospital, which was originally built in the 1720's, and was officially opened in 1725. Originally the hospital was to the north west of Maze Pond, a road that was newly made in the 1720s, but as the hospital expanded throughout its history, the various houses on the street were pulled down, and now the street runs through the middle of the hospital complex. 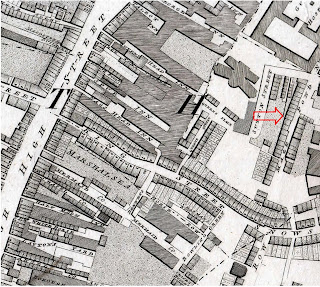 A plaque on the railings near Guy's Hospital bears the following inscription:

The "Maze" Pond, which used to be situated at the southern end of the Guy's site, was fed by a tributary of the Thames river, now known as 'Guy's Creek.' Archeological excavation of the site has unearthed an early Romano-British boat and roman timbers edging the creek.

In the Middle Ages farmers from Kent and Surrey used to drive their cattle up to London for sale at Smithfield Market. The fields around Maze Pond were a focal point where the cattle were grazed and watered.

"Mr Guy's Hospital for the Incurables" was built on this site in 1725. John Rocque's 1746 Map of London shows the pond still in existence. The local street-names then included "Maze Pond," "Little Maze Pond" and "The Maze Pond," which subsequently became Great Maze Pond - the name it still has today.

A further plaque on nearby St Thomas's Street reminds us that from 1815-1816 John Keats lived here while studying at Guys Hospital.

View London Corresponding Society Meeting Places in a larger map
Posted by Pub Hunter at 11:22 AM