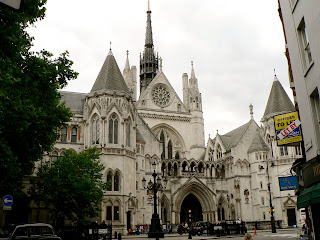 "Robins Coffee House Shire Lane" according to spy Lynam's report of 17 January 1793, is "a very good room, 29 meets there, and will take any of yd Division's on Monday & Friday nights" (Thale, 44). During Hardy's trial Henry Alexander, a spy, described a meeting of Division 29 in November 1793, which met at "Robinson's Coffee House in Shire Lane," and at which between sixty and a hundred people had been present (Thale 90). In February 1793 Division 12 was due to meet at the Crown in Newgate Street, but if refused at the Crown it was to go to Robin's who would take any of the divisions (Thale 51). Similarly in March Division 1 was forced to remove from 8 Queen Street to Robin's. This suggests that a number of taverns were coming under increasing pressure not to allow the LCS to meet on their premises, but that Robin's (significantly perhaps a coffee house, rather than an alehouse) remained sympathetic to the LCS. Division 29 continued to meet at Robin's until after Hardy's arrest in May 1794. A further spy report, this time from Spy Taylor describes a meeting that took place here on March 11 1794, the day before Hardy's arrest: "The chair being taken Ashley the delegate read the Report from the General Commee the same as in the Second Division of the Preceding Night - Some very violent Persons present who gave toasts and sung songs of a very treasonable tendency - One person drank a Speedy Guillotine to the King meaning his Majesty but I could not learn his name" (Thale 122). After Hardy's arrest the nature of the meetings go increasingly hot. The final eye witness report of an LCS meeting comes from the oral testimony of George Sanderson, who had attended a meeting of the 13th Division at Robin's on Monday 19th May 1794: "A Member stood up and said that the House of Commons met at three, and Mr Pitt will go over Putney Bridge at 12 o'Clock. No Explanation was made - but the Examinant understood it to mean that there would be an Opportunity for any one to dispatch him" (Thale 171). Despite its importance to the LCS Robin's Coffee House appears not to have left much of a trace in the history books. None of the numerous studies of the London Coffee House mention it, suggesting that it was not sufficiently salubrious to have left much evidence behind. 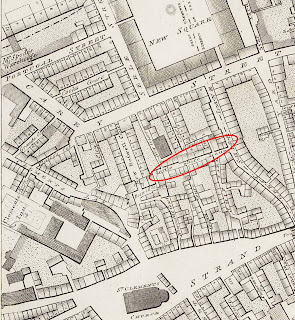 View LCS Pubs in a larger map
Posted by Pub Hunter at 10:25 PM